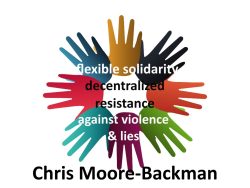 What If Trump Is Still President?  (He is.)

Combative by nature, happier in a fight, the president may now have to choose between escalating the pitched conflict that has torn Washington apart in recent years and attempting the sort of reach-across-the-aisle conciliation that has rarely marked his presidency so far. [New York Times]

The President, of course, by his own nature, has already chosen – his skills of bullying and deceit will be used to the max.

Well, Sometimes Reality Is Not Pleasant

In an article at TruthOut.com, we are urged to face the deeper, more unpleasant realities, and devote ourselves to a diverse but very serious resistance against the deadly directions in which our national executive is pushing us. [It’s Time to Claim Our Highest Vision: Let’s Embrace the Great Turning]

are stark early-warning signs of totalitarian takeover. In this setting … the new administration is relying on social changemakers to stay in their customary mode of “playing defense.”

A firefighter is a crucial asset, a life-saver. But when someone is deliberately setting fires, we can’t let all our attention go to putting them out. We’ve got to work at a deeper level.  The author of the above article, Christ Moore-Backman refers to George Lakey’s 10 point plan “to stop Trump and make gains in justice and equality.”  I hope to write a short summary of those points in another post soon.

But what do we do now?

We can focus on these things and not all have to be working on one project, or in one movement. It becomes, rather, a “movement of movements.” It’s really a very hopeful perspective.

Moore-Backman emphasizes two things.  1) We need a decentralized resistance that cannot be easily either smashed or co-opted (misdirected or taken over).  2) We need a deep, widely-shared three-pronged strategy of movement.

to move in decentralized concert — the paradoxical holy grail for movement-makers today — we need to set our sights on a shared and deeply inspiring beacon.

The Beacon: A 3-Mode Strategy

The “beacon” is a 3-prong strategy.

by definition, the Great Turning is inclusive of three mutually supportive modes of action:

He gets these three from a long-term and careful analysis of Gandhi’s thought and action. It requires clarity and focus. AND we can focus on these things and not all have to be working on one project, or in one movement. It becomes, rather, a “movement of movements.” It’s really a very hopeful perspective.

We can each work on it, starting probably with #3, “self-transformation“, and working in different ways, even with different priorities, on the other two – nonviolent resistance to things already in place or already happening, and building up alternative ways of being and doing American, and world, society.

What do we do? He says 2 things. 1) We need a decentralized resistance that cannot be easily either smashed or co-opted (misdirected or taken over). 2) We need a deep, widely-shared three-pronged strategy of movement.Click To Tweet

The three “mutually supportive modes of action” are developed by him in his book, The Gandhian Iceberg. It’s a good introduction to Gandhi; and it has moral / spiritual depth, contemporary political / social realism, and a lot of his own experience and integrity in it.  The three modes are the under-water part of the iceberg (self-transformation), the above-the-water part (constructive building of alternatives), and the tip, or contact point of the iceberg (“bold nonviolent resistance”).