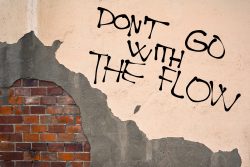 Jesus did NOT tell his oppressed hearers not to resist evil. That would have been absurd. His entire ministry is utterly at odds with such a preposterous idea.
– Walter Wink

Jesus said to “turn the other cheek”:

You have heard that it was said, ‘Eye for eye, and tooth for tooth.’ But I tell you, Do not resist an evil person. If someone strikes you on the right cheek, turn to him the other also.
— Matthew 5:38-42

Does “turn the other cheek” mean we should be doormats? Is it ever appropriate for Christians to resist authority?

You know, “doormat” was not Jesus’ style, nor the style of his first followers.
They were compassionate,
and they were non-violent,
but they were NOT doormat quality.

I have four arguments.

1. When Jesus uttered those words his topic was the avoidance of violence (“eye for eye”); so we should expect the instruction that follows to deal with ways to avoid violence, which is a different focus than instruction about submission.

2. Jesus and his disciples did not behave in subservient or unjustly cooperative ways toward secular or religious authorities.

3. The phrase “do not resist” is a poor English choice for the Greek wording Matthew used.

4. The physical event of being struck on the right cheek presents an interesting problem.

[There’s a longer discussion of these four points in an earlier post.]

SO if my take is accurate:

A. Jesus insists on integrity and justice, and the pursuit of those values often precipitates conflict with powers and customs, and often requires deliberate resistance.

B. But Jesus also insists on non-violence.

We can be non-violent and still act and speak in ways that resist and undermine falsehood and unjust power. And that, I believe, is a good part of what Jesus is after in this short teaching. Christians clearly have a role to play in exposing and resisting evil.

[This is a summary of a longer article discussing Jesus teaching about turning the other cheek.]