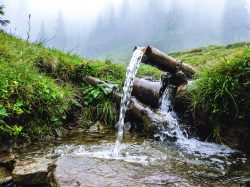 What moral consequences can we expect at home in the US when we continue to practice unjustified and indiscriminate violence against countries, cities, and families around the world? What can we expect among the great masses of America if the rulers are self-indulgent, dishonest, violent, or exploitive towards their own citizens?

I don’t know the dynamics in any detail, but I believe we should fully expect that corruption at the top will sooner or later breed violence and indifference locally in the cities and the neighborhoods – not only in the broader American economy or towards people in other nations.

I can’t prove it statistically, of course. But, you know, the Apostles and Prophets, even Jesus himself, never tried to prove their accusations, analyses, and predictions. Sometimes you’re just right. And sometimes you even know that you’re right – whether you can prove it to the satisfaction of everyone else or not.

And I am sure, as no doubt many of us are, that the morality practiced by those at the top will “trickle down”.

On one hand, the money is supposed to trickle down, but doesn’t.

On the other, we always hope – or pretend – that the morality at the top won’t trickle down, but it does. It does cause moral and psychological repercussions in us and our kids.

Who was responsible in this case? Where did the evil originate – with the people or with the priests? It doesn’t much matter; the result is the same for both.

'As a man sows, so shall he also reap' surely applies to societies and nations as well as to individuals. And it is wise and true whether you can ever tie it to specific circumstances or not.Click To TweetBut we do know the Bible often blames the priests, the kings and nobles, and the judges for misleading and exploiting the rest – the great bulk of the people. (Jeremiah 23 and Ezekiel 34 are classic. So also much of Isaiah – ch 58 for example. And the theme is strong in the short book of Micah.)

I sense increasing levels of generalized cynicism and anger in our country, greater depths of fear and of despair, even increasing violence.

Part of it, we know, is being deliberately cultivated – that in itself is rotten moral leadership and has a terrible trickle-down.

And I think I see increasing insensitivity to the troubles and tragedies of people around us, people not ourselves

– a hopelessness and disregard toward the world around.

We always hope – or pretend – that the morality at the top won’t trickle down, but it does. It does cause moral and psychological repercussions in us and our kids.
Judith Nygren in the Omaha World Herald (June 15, p B1) wrote recently about Omaha’s striking upsurge of violence against women this year. At a press conference a number of speakers

“urged the community to speak up and help end the recent spate of slayings known or thought to have been committed by husbands or boyfriends.”

The article gave good advice, as did the speakers. And a number of agencies provide services helpful to women caught in dangerous relationships.

And don’t blame the problem on Omaha per se.

“Then came 2006 and the mounting number of area women killed by a partner or (possibly) a boyfriend or husband.”

But here’s the touchy part, the part that can make you catch your breath.

“An important part of ending abuse is assuring victims – even abusers – that the community cares, that people are reaching out with support.”

Ah, there’s the rub. If the nation’s leaders are insensitive to the violence they are doing – what’s to become of any caring spirit in the rest of us? What if “the community” in general learns to just no longer care?

Of course a connection cannot be proven between any corruption at the top and a shocking surge of domestic violence in Omaha. It’s easy to say that this is just an unexplailnable statistical blip. It may well be.

But clearly there is a moral and social-psychological principle here even if this violence in Omaha turned out to be not an example of it.

What goes around comes around.

“As a man sows, so shall he also reap” – or the contemporary version, “What goes around comes around” surely applies to societies and nations as well as to individuals. And it is wise and true whether you can ever tie it to specific circumstances or not.

Dealing with large societies makes it very difficult to tie such a principle to specific events. But the value of having the guidance the Bible provides is that we can come to understand crucial principles that are true anyway – regardless of contemporary statistical ‘proof’.