If you mention any social issue needing attention, that does not involve abortion agitation, some people come back with – “Well, there are more abortions than there are victims of that issue.” 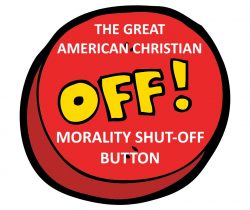 Sadly, in actual practice, by this “but abortion!” standard, I literally can ignore my neighbor whom, as it says in 1 John, I “CAN see” – because some people somewhere offend against unborn children.

But it’s true that many think – or at least operate – this way.

I’m not making this up. I watch them and listen to them.  They in practice turn off virtually all practical concern for our Christian duty to love the neighbor “you can see”, and they do it just by mentioning one issue!

Now, I am not pro-abortion.

I may disagree with the “Christian right’s” narrow politicized solution to the issue, but that’s because I believe there are MUCH better ways to go about it.
And I will counsel against abortion and try to find resources to that end.

to avoid the much more frequent, non-abortion-related, obvious and equally destructive forces operating against a whole lot of my neighbors.

It makes me sad to call it a “cop-out”, but that is how it in fact works.  They don’t just neglect other weighty matters that are right now damaging their own neighbors; often they even RESIST expressing any concern or taking any action, political or otherwise, on behalf of those neighbors. The “I vote pro-life” approach obviously makes some folks believe they  do not have to make moral judgments about ANYthing else!, or moral commitments to ANYone else!

They just say “But what about abortion?”, then “vote pro-life”, and they can totally ignore what’s happening in plain sight here and now,

That is actually how this strategy works for them. Relief from confusion!  Freedom from (many kinds of) worry! And self-assumed righteousness and superiority all in one fell swoop.

Of course abortion is a huge social disaster area.

But that’s no excuse to despise these many other kinds of suffering of our own neighbors in our own towns.

I read a news story somewhere today quoting a woman angry that she had voted for Trump, saying something like “I realized I care as much about a child on the border of Texas as I do about one still in its mother’s womb.” Yes.

We act like we don’t have to even THINK about those other people – our neighbors – because some OTHER people practice or promote abortion – or some other behavior we do not approve of.  Even if they don’t promote abortion, they get slandered – falsely accused – and Presto! we are absolved of all social responsibility, to them or anyone else.  See?  It really IS a cop-out.

What a handy way to ignore the clear teachings of Jesus and much of the rest of the Bible.

We don't even THINK about our neighbors. After all, some OTHER people promote abortion. If they don't promote abortion, we say that they do - and Presto! we are absolved of all social responsibility.Click To Tweet