Societies that are more egalitarian find themselves willing and able to make consistently larger investments in education, training, infrastructure, research, and other public goods. 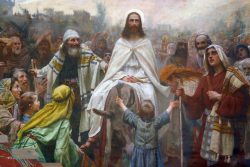 8 Many people spread their cloaks on the road, while others spread branches they had cut in the fields. 9 Those who went ahead and those who followed shouted, “Hosanna! Blessed is he who comes in the name of the Lord!” – Mark 11:8-9 CEB

The Arrival Of The King

Last Sunday, Christians worldwide remembered the entrance of Jesus into Jerusalem, not on a mighty war horse but on a young donkey.  This image floods the imaginations of followers of Jesus with images of an unexpected king being celebrated in an unexpected way. However, within a few days, this embrace as King is abandoned, and cries of “Hosanna!” are replaced with shouts of “Crucify him!”

As unsettling as the abrupt change in hearts and tones is to read, we experience similar reactions and changes in our own relationships with Jesus and his church. What begins as sincere commitment and devotion can quickly become disengagement and frustration because we were not given what we thought should have been promised.

What begins as sincere commitment and devotion can quickly become disengagement and frustration because we were not given what we thought should have been promised.

The King We Want

One of the most recognizable paintings in American history is of George Washington on horseback with his sword drawn, pointing at his soldiers. He is being saluted at the Battle of Trenton. It is an inspiring painting; it brings to mind thoughts of the courage and resolve of those who fought for independence from an occupying force. It is hard to not feel a bit more patriotic when looking at that painting. When we think of a great leader or a great king (or president), it is easy to have an image of Washington in mind and long for another like him.

The King We Need

What if we don’t need another George Washington? What if we need a leader to show us how to win by giving up our power and dying to our own desires? This is the King that we celebrate the entrance of on Palm Sunday, a king not interested in leading a great battle, demanding his rights, or fighting for a throne. The King we celebrate and commit to following on Palm Sunday is unwilling to do things our way, and our personal transformation comes only by following him. In a world that demands security and proof before following, Jesus bids us to follow him down his dangerous path. In The Lion, The Witch, and the Wardrobe, we read of the reaction that Susan Pevensie has to discovering that the King of Narnia is a lion and our reaction to following Jesus may be very similar and rightfully so:

“Who said anything about safe? ‘Course he isn’t safe. But he’s good. He’s the King, I tell you.”

Aslan is a lion- the Lion, the great Lion.” “Ooh” said Susan. “I’d thought he was a man. Is he-quite safe? I shall feel rather nervous about meeting a lion”…”Safe?” said Mr Beaver …”Who said anything about safe? ‘Course he isn’t safe. But he’s good. He’s the King, I tell you.”

In a world that demands security and proof before following, Jesus bids us to follow him down his dangerous path.Click To Tweet

Just as the shouts changed between Sunday and Friday during Holy Week, our allegiance to King Jesus can quickly be shifted.  Just like those in Jerusalem wanted a king concerned about their agenda, we also want Jesus to be concerned with ours.

One of the most common reasons that I hear from people who have left a church or have lost the passion for following Jesus is basically that “it didn’t work.” We come to Jesus and follow the version of him that we have created: a Jesus who is passionate about our passions and is ready to fix our problems once we are on his team. We often reduce following Jesus to cleaning up our language and giving the appearance that everything is great and for our efforts we are owed resolved money problems and a life with less calamities. It is often in the midst of one of life’s obstacle courses that we discover our true need this king and his people.

Jesus didn’t promise a life free of hardship and conflict, and following him requires more than token lip service. Jesus is bringing his Kingdom to Earth, not becoming the king of our kingdoms, and he invites us to be citizens of this new Kingdom. The Kingdom of Jesus is committed to loving God by caring for people; its citizens feed the hungry, clothe the naked, heal the sick and give a voice to the voiceless.  It is a kingdom where true joy is found in sacrifice.

The Kingdom of Jesus is committed to loving God by caring for people; its citizens feed the hungry, clothe the naked, heal the sick and give a voice to the voiceless.  It is a kingdom where true joy is found in sacrifice.

Followers of Jesus turned on him between Sunday and Friday because the King they hoped for was gaining victory through his own death; he was saving his enemies by allowing them to crush him, and they could not accept the paradox. My prayer this Holy Week is that we, as Kingdom citizens, recommit to King Jesus and to doing things his way.