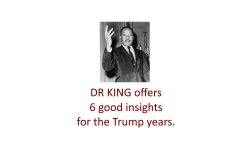 A black man in prison

But while in that dangerous place, Martin Luther King wrote a letter to the white clergymen of Alabama – he himself being ordained clergy – asking for their sympathy and support.  The request was largely ignored.  Though ignored, the letter contained a great deal of wisdom.

These sentences are from that letter, and are presented as good advice for us today dealing with the immorality and violence radiating from the White House. There are more quotes from that famous letter in this earlier article – “Short Quotes – Martin Luther King’s “Letter from Birmingham Jail“”

It is true for us – when people are mistreated by our government, or by unofficial agents egged on by our President – CAN we “sit idly by” because we are not in that precise spot, with those precise people?

I cannot sit idly by in Atlanta and not be concerned about what happens in Birmingham. Injustice anywhere is a threat to justice everywhere.

This is a pattern of many American heroes down through our history, including the Founding Fathers themselves in their resistance to King George and the government in London. It is the way Jesus operated.  It is what the ancient prophets did.

One has a moral responsibility to disobey unjust laws. I would agree with Augustine that “An unjust law is no law at all.”

3.  GROUPS ARE MORE IMMORAL THAN INDIVIDUALS

Do not be surprised if your private thoughts and conclusions tend to seem less persuasive when you are in a group – even of friends or colleagues.  He’s right – it often is harder to be rigorously careful and rigorously honest when we think, or subconsciously feel, that our status or approval or acceptance with others might be affected.  Therefore groups tend strongly to be less moral and less truthful than individuals.  Niebuhr treats this issue in his book Moral Man and Immoral Society, 1930.

… as Reinhold Niebuhr has reminded us, groups are more immoral than individuals.

When people protest being badly treated, it is the evil treatment, not the protest, that needs to be dealt with.  As King showed (following Gandhi), tension need not be violent.  But it often contributes to real progress and is necessary before the progress begins to happen.

… I am not afraid of the word tension. I have earnestly worked and preached against violent tension, but there is a type of constructive nonviolent tension that is necessary for growth.

He gives several examples of people who were called “extremists”, or were treated badly because they stood for love, they stood for justice.  We also may have to step out of our comfortable conformity and be called extremists because we finally choose to stand up for truth and justice, for our neighbors whom Jesus commanded us to love.

6.  YOUTH DISGUSTED with the CHURCH

I recently heard a woman who is somewhat of an expert in generational issues, and who has a deep love for younger adults and not-yet adults, “I frequently meet young people who hear from God – who see through. We must support them – even when they are irritating.”  That fits in with this concern of King’s.  When the church stands silently aside, or even chimes in with the violence and contempt, the youth will often get fed up and walk away.  Let’s not make that necessary.

I am meeting young people every day whose disappointment with the Church has risen to outright disgust.

We today need to listen to MLK. 'I cannot sit idly by in Atlanta and not be concerned about what happens in Birmingham. Injustice anywhere is a threat to justice everywhere.' -Martin Luther KingClick To Tweet