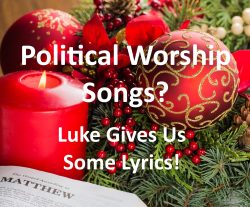 The “songs” of Mary and Zechariah,  just before Jesus’ birth, are both blatantly political.

Mary:
He has performed mighty deeds with his arm;
he has scattered those who are proud in their inmost thoughts.
He has brought down rulers from their thrones
but has lifted up the humble.
He has filled the hungry with good things
but has sent the rich away empty.

Zechariah:
He has raised up a horn of salvation for us
in the house of his servant David
(as he said through his holy prophets of long ago),
salvation from our enemies
and from the hand of all who hate us —

I.  These two poems (“songs”) are a key “Preface” to the life and work of Christ.

We can expect these statements of Mary and Zechariah to give us a good idea of what Jesus is about, and thus of what God cares about and is working on.

It’s quite interesting to whom Mary stresses that God’s blessings and help are coming, and that she emphasizes strongly issues that are often purely political and economic:

Why emphasize that downer, depressing stuff – “humble”, “hungry”, etc.? That reminds us of “the Beatitudes” in Luke 11.

Now making remarks like that, in almost any time or place in human history, is asking for trouble. Do you suppose she was accused in her day of encouraging “class warfare”? Today, if you complain about the rich or the rulers or the arrogant, you may well be accused of class warfare.

B.  And Zechariah touches on related issues.

Do we have any enemies?

Enemies – people who truly hate us and will certainly harm us if they get the chance. Or perhaps more benignly, people who could not care less what happens to us. Zechariah sees the Coming One freeing us from such threats, from such violence of word and deed, and he says so, in public.

Zechariah sees the Coming One freeing us from such threats, from such violence of word and deed, and he says so, in public.Click To Tweet

II.  Evangelicals in the US today

• like to talk about being hated or persecuted or having their religious freedom interfered with. In the US today these complaints are almost entirely imaginary, and cause these whiners to be justly mocked and even feared; BUT
• The same Evangelicals carefully avoid any talk of trouble coming for the wealthy and for rulers.

A.  Embarrassing to Evangelicals?

I expect this passage seems embarrassing or at least confusing to many evangelical Christians today. What does this have to do with the things they want to talk about:

B.  Not “Just Spiritual”

We are often told just to take this all as being about “spiritual” deliverance, not having to do with actual oppression and abuse, political and economic, in this world. But in fact Mary and Zechariah clearly intended their remarks to be taken straight, and applied to real-world social and political situations.

To the extent that it’s “spiritual”, it is spiritual in the ordinary settings of daily life, of real economic and power issues, at every level. It has to do with active spiritual submission to the agenda of the Holy Spirit as made clear in the Gospels and elsewhere. What could be more spiritual?

IV.  God is the Original Creator and Lover of humans

– of the human race. God is the greatest Power.

Do we imagine this Great, Loving God has no concern about how lesser worldly powers treat His awesome creation?

The spiritual, social and physical worlds all interpenetrate each other. They are inseparable. The spiritual is realized IN our physical and relational experiences in this life. God is very clear about caring for such things.

God is the greatest Power. Do we imagine this Great, Loving God has no concern about how lesser worldly powers treat His awesome creation?Click To Tweet

In the last paragraph of Zechariah’s song, referring to the coming ministry of his son John (called “the Baptist”), there’s an interesting connection made.

“And you (John the Baptist) will … give [God’s] people the knowledge of salvation through the forgiveness of their sins.”

Thus the sequence Zechariah sees is that

CONCLUSION: These are very great and precious goals that Mary and Zechariah see –

very great and precious projects that John and Jesus are going to pursue. The work is obviously not completed yet, but it also has obviously been working in many lives throughout history and in the world today.

The heart of God is FOR us – ALL of us, including explicitly the lowly, powerless, and despised – as God’s agenda is here presented to us by Mary and Zechariah.  This God of the earliest Christmas worship songs UNDERSTANDS how much injustice and abuse goes on in this world. In these songs, and the tradition they arise from, God’s heart is FOR US, and FOR this suffering and self-destructive race of humans.

And in God’s concern, God is entirely willing for His worshipers to speak honestly about these things – about what is going on, and what God intends to do about it. Mary and Zechariah’s politicized Christmas carols make this bluntly clear.

I am very glad for that.