When the true thugs hold the levers of power it matters little what their alleged politics are.  But in this case in Argentina it was the “conservatives” or “right wing” doing the violence – as seems to be the trend in many places the last several decades. 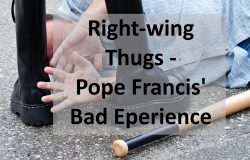 Thugs With the Power

With Argentina’s dictatorship it was anyone they thought of as “leftist” or “liberal” who got rounded up and disposed of.

This is a response to the Netflix series “Llamame Francisco” (4 episodes, English subtitles). The miniseries is about Jorge Bergoglio in the years before he became Pope Francis I.  It gives a pretty terrible view of what it’s like when the true thugs take control (in episode 2 and especially 3 – 30,000 ‘disappeared”).

I now hear talk (or see it online) that echoes that same vicious hatred – toward half of the US population.

I now hear talk (or see it online) that echoes that same vicious hatred – toward half of the US population – the half that think of themselves as somewhat liberal, or liberal on certain issues, or as Democrats. There’s even more frequent slander and hate dished out on the basis of race or of immigration status.

There are lots of Americans now who hate or claim to, and want gone (dead or disappeared), a whole lot of their fellow Americans.  At least that’s what they say, and in matters like this you have to assume they mean it.  This is true, and it is absolutely vile. It is surely anti-Christian and anti-American – two different things – but it is becoming increasingly fashionable to talk like that.

Not a good thing, folks.

30,000 is a lot of people, regardless of the population base. The film portrays things pretty accurately.  These things happened.

You never know who they are going to grab next, or where or when – though the who is somewhat guessable. And you never really know who are their agents at whatever level.

And they are merciless.  Or if they “show mercy” it is tactical, or a mere accident.

Many Resisted.  Many Disappeared.

So many lost loved ones or colleagues, with no explanation, no information provided – just disappeared.
But many chose to resist, “for others” as Bergoglio says in the film.

Once you are arrested it’s too late for reconsideration, too late for strategy.  You choice was made, more or less in the dark as to what’s really going on.  Now your fate works itself out irresistibly, whether quickly or slowly, whether you like it or not.  You might just be shot. You may well be tortured.  In this case many of the “disappeared” were thrown out of airplanes into the Atlantic Ocean.

Causes and characteristics – Social Toxins All Around

This list is from my personal reaction to the film:

Do you detect any of that list or similar social toxins sloshing around in the USA?

Irrationality, Fraud, Violence.  How do you fight it?

There is so much deceit and irrational hate in these rulers and their sycophants and their hired agents.  We can watch it in action.

What about the rest of us – when we get down to it?

Do we fight hate with hate?
Violence with violence?
Lies with lies?

Here’s an article about John Paul II dealing with Nazis and Communists in the years before he became Pope: John Paul II: Private Prayer and the Dangers of Public Life.

You never know who they are going to grab next, where or when. You seldom know who is one of their agents at whatever level. And they are merciless. Or if they “show mercy” it is tactical, or a mere accident.Click To Tweet
Share
Share
Tweet
Pin