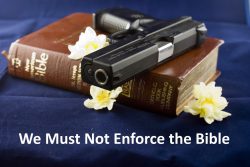 Here’s another example of the misunderstanding and misuse of Scripture by the ‘religious right’.  This was quoted to me to show that no Christian could ever vote for Democrats.

“Don’t you realize that if even one person is allowed to go on sinning, soon all will be affected? Remove this wicked person from among you so that you can stay pure.” (1 Corinthians 5:6,7, NLT)

Do you mean it is the Christian’s job to prevent every last person in society from sinning?

And if it were their job, should that Christian or religious group try to use the corrupt powers of secular government to achieve that goal?

The United States’ founding was an effort to prevent just that sort of thing from happening,

and we should deeply appreciate that. It has been quite effective in keeping the amount of religious conflict and bloodshed very low in this part of the world. Please, let’s not undo that!

A liberal state is an achievement that has a long history — a history that allowed the West to transcend the murderous grip of warring Christian factions.
– Shadia Drury

Further, if we are going to go after public sinners, we really need to focus strongly on the current administration

– or the prior one, or the one before that (see last prior blogpost, about the 2nd Bush administration).  But especially the current one (Trump), since that’s happening NOW.
They are very powerful, and their sins and illegalities are very broadly damaging. Leave the “sins” out of it. Just go after the illegalities! We don’t need new laws to reduce the destructiveness of the highest levels of government; we just need to enforce the laws we already have.

But as to your religion, or mine –

The Bible has great resources of truth, guidance, and moral health to offer us,

but we must treat it more carefully, more honestly, more humbly, than is often the case. And we must handle it in ways that greatly respect the consciences of our neighbors – which, after all, the Bible teaches us to do.

To misuse the Bible is really to hold it in deep contempt. We can, and must, do better than that.

This was written in 2004, edited and republished in March 2017.
See also:
“Should We Legislate Christianity?”
Theocracy (Religion Runs the Government) – We Would Deeply Regret It
Two Types of Religion – Authority, Love