Jesus was a highly respected teacher of morality and of the spiritual life.

So, logically enough, a man asked him to take a stand on a moral issue between the man and his brother (Luke 12:13-15) –

Someone in the crowd said to him, “Teacher, tell my brother to divide the inheritance with me.”

Strangely, Jesus disappointed the man by refusing to do so, and questioned why the man thought he (Jesus) had any such authority.

Jesus replied, “Man, who appointed me a judge or an arbiter between you?”

Ok. So Jesus said he is not a judge. However, he then went on to make a strong moral demand on everyone present,

including the complaining man and his (apparently) offending brother.

Then he said to them, “Watch out! Be on your guard against all kinds of greed; a man’s life does not consist in the abundance of his possessions.”

So we have a paradox.

Jesus, after all, is neither a liar nor a hypocrite.
Consequently, dishonesty in the garb of religious zeal really rubs him the wrong way.

Jesus says he’s not a judge, but then places a high moral standard on everyone.

He makes a strong moral judgment in which he emphasizes two defenses against the sin of greed:

Many Christians and churches today get that exactly backwards! 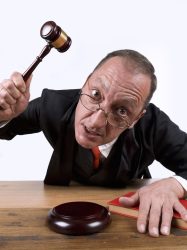 Too often we put great energy into judging others and trying to enforce certain moral standards on them, while very little energy goes into fixing our own prevalent, obvious, and destructive immoralities.

So that, as the Bible says, “the name of God is blasphemed among the unbelievers because of you.”

If you mention ‘moral issues’ to many Christians today, they immediately think of abortion and homosexuality, and they are NOT thinking of the applications to their own lives. Their thoughts quickly jump to “other people” – and the immediate next step is self-righteous pride and/or anger. I’m speaking from experience; I imagine you have also seen it.

That is not the way Jesus operated.

I am convinced that if Jesus stepped onto the platform

of any of our activist churches today he would not start talking about abortion or homosexuality.

He would not focus on what are perceived as “other people’s sins.” He would stay more local, and start digging into

Jesus clearly wants them to apply this high standard TO THEMSELVES,
EVEN while he himself refuses to set himself up as an arbiter in their specific situations.

and other sins that plague the leadership and many of the faithful attenders of many of our churches.

Jesus, after all, is neither a liar nor a hypocrite.

Consequently, dishonesty in the garb of religious zeal really rubs him the wrong way.

As he put it himself, “Why do you call me Lord, Lord, and do not do what I say?”