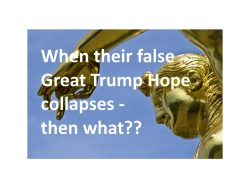 I know of, and know personally, a LOT of white professing Christians for whom the emotional and intellectual investment in Trump has been VERY great.  How will it go for them? How will it go as the great golden image begins to dramatically collapse in full view of the whole world?

It’s a hard transition.  I’ve heard that in, say, 1947, it was very difficult to find people who had lived though the 30’s and 40’s in Germany who would admit to having been Nazi’s.  Even harder to find ones who were proud of it, and would gladly say so.

It’s a very difficult thing, the death of a god.

What will those people be feeling, and needing?

There will be some serious pain.

There will be anger.

There will be a lot of confusion.

All of that’s hard to take.

Pretend it didn’t happen.  Pretend you didn’t say or approve of those things.  This is fraud, fraud against oneself and against others.  It does not help in actual recovery – but it’s a common human response.

It’s human nature.  But it would be very wrong.  Sadly, these self-destructive behaviors might also reach over into attack against others.  There truly has been much – a lot more than before – much hate sown publicly, blatantly, over the last 3 years, and a lot of explicit and implicit permission granted to express it in violent behavior.  We should expect there to be people willing to act on it as Trump starts shrinking, even if they have not yet done so.

Basil H. Liddell-Hart, the historian and analyst of military strategy, might say we should come at it obliquely, or from a different “front.”  Flank them.  But how?  I’m not sure.

But the first, most obvious answer (“What will they be needing?”  “How does one recover?”) seems to be, well, just bring TRUTH.  It will not be welcome, but it is the crucial therapy – as Paul said, “speaking the truth in love.”

This is just thinking out loud.  What do you think?

Bring Biblical, Christic, Prophetic, and civic, republican, democratic values, variety of ways, not always to particular instances of their evil words and deeds. Change the context, the background. Bring truth.Click To Tweet