Find and work from your truest, deepest values… Say it out loud and every chance you get. 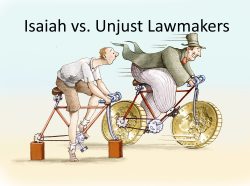 The Bible is blunt about the dangers of “legal” oppression done by the wealthy and powerful. What Isaiah actually says here is important to notice. Look at the details.

Trending
Two Kinds of Religion. Is Your Kind Good for People?
The suffering caused by those who MAKE those laws and decrees is terrible. Is it the fault of the victims? Not according to this passage. DOES IT MATTER that some laws are unjust? It matters to Isaiah! Isaiah 10.Click To Tweet

I.  TWO SETS OF PEOPLE

A.  THOSE WHO MAKE UNJUST LAWS / OPPRESSIVE DECREES:

Here is abuse of power, 2700 years ago!  It’s no new thing – and the Bible complains about it, warns strongly against it. There are always people who have power – sometimes they have a great deal of power. It is frequently misused. Also:  The concern expressed here is not about legality.  Are they working within the laws?  Then they are (at least temporarily) legal. But they are unjust; and that is deadly for all concerned.

B.  THEIR VICTIMS – WHO SUFFER UNDER THE UNJUST LAWS / OPPRESSIVE DECREES:

The poor.  Widows.  Orphans.  Those who have rights (that is, had rights), but have lost them to the arrogant abusiveness of the rich and powerful.

A.  THE FREEDOM, POWER, AND ARROGANCE

OF THOSE WHO MAKE UNJUST LAWS / OPPRESSIVE DECREES

Power always thinks it has a great soul, and vast views, beyond the comprehension of the weak; and that it is doing God’s service, when it is violating all his laws.

CAUSED BY THEIR UNJUST LAWS / OPPRESSIVE DECREES: That is, the suffering caused by those who make those laws and decrees. Is it the fault of the victims? Not according to this passage. Does it matter that some laws are unjust? Clearly it matters to this prophet!

An unjust law is no law at all.

C. THE SUFFERING OF THE ARROGANT, THE ABUSERS

“CRINGE AMONG THE CAPTIVES OR FALL AMONG THE SLAIN” “WHERE WILL YOU LEAVE YOUR RICHES?” – the worst kind of question for the truly wealthy. That’s pretty brutal, but it really happens.  This was not idle ethical or religious speculation by the prophet.  It was practical ethical analysis, and direct prediction.  “Woe to you.” Or, as Jesus said,

Beware of the teachers of the law. They like to walk around in flowing robes and love to be greeted with respect in the marketplaces and have the most important seats in the synagogues and the places of honor at banquets. They devour widows’ houses and for a show make lengthy prayers. These men will be punished most severely.

The Bible teaches this.