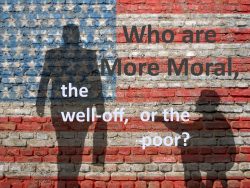 That’s not an easy question.

The Bible criticizes the wealthy, sometimes individually, sometimes for specific behaviors, sometimes even as a group. But it also has harsh words for some of the poor. It sometimes speaks well of wealthy persons; and even offers promises of material blessing (i.e. wealth) under certain circumstances.

Here’s John Ruskin’s list of common characteristics of each group.  I think it’s pretty realistic. (Ruskin had a major influence on the thinking of Mohandas Gandhi, especially on the connections between economics and morality – via a work called “Unto This Last”, published in 1860.)

Which traits in each of the two lists do you see as moral, and which ones as immoral?  Do you think he’s right in the moral propensities – good or bad or ambiguous – that he sees in each group?  Notice that he does not sort the items in the list by moral quality, at least as far as I can discern. (List markers added.)

– that is, in a “community” somewhat similar to the western-style democracies of our day –

the persons who become rich are, generally speaking,

The persons who remain poor are

What a mix. Not making it easy, is he?

So I would say: It doesn’t help with our moral discernment to call someone a Capitalist, a Conservative, or a Libertarian – a Socialist, a Liberal, or a Democrat – a Communist or an anarchist – or even a Christian, an atheist, a Muslim a Hindu, etc.

“Nazi” or “Fascist” may be actual moral descriptions, since they represent political movements with deliberately hateful and destructive agendas; Nazism in particular is not just an economic strategy. Nazism especially, it seems to me, is simply a pretend ideology in service of arrogance, violence, of all kinds of blatant evil and harsh and persistent bullying. But Communism has been used that way, and capitalism, and certainly Christianity.

So the problem, rich or poor, educated or untrained, in every race and religion, is somehow INTERNAL.

As Jesus said, “It is from the heart that the mouth speaks.”

This is a slightly edited version of a post from 2007.