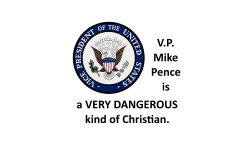 His professed Christian moral values are NOT the values he holds most dear.

There’s something else he wants more,

and he will sacrifice — already HAS sacrificed — any Christ-like, or Bible-based values he may hold or may have held in the past, to pursue what he wants most.

He does that because what he MOST wants is power.  It’s working.  He has gotten a lot of power by becoming Vice President, and is very close to getting a lot more. My guess is that once Republican leaders decide they are ok with “President Pence”, Trump will be on his way elsewhere.  Who knows?  But that’s certainly one of the possibilities.

1. When a person is convinced they are God’s chosen one to rule others, there’s a strong likelihood they will become very dangerous to pretty much everyone.

Pence seems to think of himself that way.  He assumes he is right, by Divine selection.  You will have to go along, or suffer the consequences. That’s very dangerous for all of us EVEN IF he often seems to be a “nice guy,” and often says or supports very “Christian”-sounding things. People like that are the reason the Founders thought it wise to have a separation between church authority and governmental authority.

2. Also, people who will do ANYthing for power are very dangerous.

There are many such people, as we have recently seen in US politics.  Pence has made very clear he is one of them.  Combine that with a sense of a Divinely granted infallibility and inevitability (#1 above), and, folks, we are on the edge of a very dangerous place.

There’s a helpful recent article in The New Yorker that gives a biographical overview of Pence’s rise to power.  It starts with

No man can serve two masters, the Bible teaches, but Mike Pence is giving it his all.

Jesus said that (about “two masters”). If he was right, Pence is wrong. If Pence is right, Jesus was wrong. I’d recommend going with Jesus on this. Pence is in fact only serving one master, Pence’s own career and power. I’m not interested in being forced into serving that.  I’d rather serve Jesus. Here’s more from that article:

In Pence, Trump has found an obedient deputy whose willingness to suffer indignity and humiliation at the pleasure of the president appears boundless.

Even some of Trump’s most devoted loyalists marveled at what Pence was willing to say. There was no talking point too preposterous, no fixed reality too plain to deny—if they needed Pence to defend the boss, he was in. When, during the vice-presidential debate, in early October, he was confronted with a barrage of damning quotes and questionable positions held by his running mate, Pence responded with unnerving message discipline, dismissing documented facts as “nonsense” and smears.

He has an odd but very dangerous theological idea that the most Christian thing to do is to serve and obey whatever secular or earthly authority one finds oneself under.  That concept is repeatedly rejected by both the teachings of the Bible, and by many examples within the Bible. But he uses that idea to justify his fawning obedience to falsehood and power-lust.

No man can serve two masters, the Bible teaches, but Mike Pence is giving it his all. If Jesus was right, Pence is wrong. I’d go with Jesus on this. Pence is in fact only serving one master - Pence’s own career and power.Click To TweetRussell Moore, a very prominent Southern Baptist, wrote that siding with Trump

“would mean that we’ve decided to join the other side of the culture war, that image and celebrity and money and power and social Darwinist ‘winning’ trump the conservation of moral principles and a just society.”

“Trump the conservation of moral principles and a just society.” How ironic.

Speaking in another of those too-frequent deadly eras in human history, another source writes:

“When the free life of man is threatened by the cult of death,

by those who deliberately make their souls eunuchs

for the sake of the kingdoms of this earth …”

This is a moral chasm. Am I not right?

This is a valley of the shadow of death. I don’t want to follow Pence — and the so-called “Christian Right” — into that chasm, where

May God deliver us.