The first act of love is always the giving of attention. 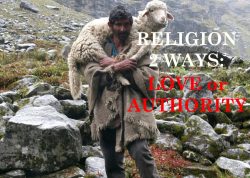 That amazement is the opposite of complacency and self-satisfaction. And that gentleness is very different from constant critique and judging.
We all, if we are religious at all, mix these together to some extent.

But they are clearly very distinct – maybe opposites – and there are many, many churches or individuals in which one or the other is blatantly dominant. And this distinction applies in every religion (or non-religion) I know anything about – Native American, Judaic, Muslim, Hindu, secularist, atheist, – whatever. It’s a human thing. But, being human, it’s also very much a religious thing.

Religion of Authority: -spends a lot time arguing, 'proving' it is right -wants to demand that you agree with it, -sometimes simply wants to dominate others -exudes an aura of self-satisfaction, self-conscious superiority -etc.Click To Tweet

Tends to Spend more Energy Being Amazed! And Being Gentle.

This religious practice tends to expend more energy being amazed that, as Paul says, “the Lord is near”.  Even here!  Even near to me! – and us! And it tends to fulfill the associated injunction of Paul, “let your gentleness be apparent to all.” (Phil 4)

That amazement is the opposite of complacency and self-satisfaction.  And that gentleness is very different from constant critique and judging. In a local church or group where this approach is predominant, guests feel welcome, even loved, even if they remain unbelievers or very uncertain about their religious or moral convictions.

Yes, but What about “faith”?

Faith clearly is crucial – utterly indispensable; but have you thought about this interesting fact?

a) Jesus insists that the primary obligation of human spiritual / ethical life is love for God, and its apparently inevitable corollary, love for the other humans within our scope of awareness.

b) But, as the Bible writers make obvious, Jesus also insists that “faith” or “believing” is the primary obligation of human spiritual / ethical life.

Which is it – faith, or love? I think they – faith and love – are both given top billing because they are functionally one and the same thing.

Paul, for example, argues that “The only thing that counts is faith working through love.” (Gal 5:7) “The only thing” – as if it were just one thing.

James makes a related argument – “I will show you my faith by my works” (such as providing food or clothing for the needy).

Isaiah beats the same drum. “Is not this the kind of fasting [worship, expression of faith] I have chosen:”

to loose the chains of injustice and untie the cords of the yoke, to set the oppressed free and break every yoke? Is it not to share your food with the hungry and to provide the poor wanderer with shelter— when you see the naked, to clothe them, and not to turn away from your own flesh and blood?

Which kind of religion – if any 🙂 – is going on in your life,

and in your religious associations, and in the religious media you participate in? If you are religious, and especially if you are a professed Christian – I hope it’s type Two. That, I believe, is