There was some excitement among certain Republican Christians when Dobson said Trump had become a “baby” Christian and should be cut some slack on that basis.

Two problems with that:

Still – this all raises an even more crucial issue.

What DOES it mean to believe in Christ,

Here is an answer. See if you agree. (This is from my new, short book, The Moral Priorities of Jesus.)

a. The Gospels Insist – We Need to Believe in Him

To all who did receive him, to those who believed in his name, he gave the right to become children of God (John 1:12) 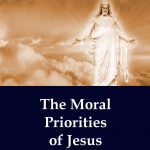 For God so loved the world that he gave his one and only Son, that whoever believes in him shall not perish but have eternal life. (John 3:16)

How can you believe since you accept glory from one another but do not seek the glory that comes from the only God? (John 5:44)

Jesus performed many other signs in the presence of his disciples, which are not recorded in this book. But these are written that you may believe that Jesus is the Messiah, the Son of God, and that by believing you may have life in his name. (John 20:30,31)

b. That is a Very Deep and Demanding Thing

We don’t hear much, if anything, about what his teaching is, or what his actual guidance for our lives would be. How is that respectful?

It often shows as
• strong respect for him,
• fascination with his character and personality,
• humility before his wisdom and love,
• an attitude of thorough honest self-aware confession before his honesty, justice, and kindness
• longing to follow his teaching and wisdom,
• commitment to shape our lives under his authority,
• willingness to listen to him over self-promoting, self-aggrandizing religious leaders and groups,
• desire to serve the people in our world whom he is concerned to serve.

It is a very big thing – which is what we would expect if Jesus really is who and what we say he is.

Unfortunately that requirement has been redefined in modern American Christian circles. It is now possible to imagine that we believe in Jesus when in fact we accord him a very small, in some cases almost nonexistent, level of respect and attention.

To believe in the Lord Jesus, as the Bible presents the idea over and over – and as history shows our English word “believe” to actually mean – is to love, to deeply admire, to cling to as a source of wisdom and truth and guidance and care.

That doesn’t work. He is smarter than that, and expects us to be too.

Today church leaders usually do not ask us to surrender our lives to the teaching and wisdom and guidance of this Great One, Jesus. We don’t hear much, if anything, about what his teaching is, or what his actual guidance for our lives would be. How is that respectful?

They may, and often do, ask us to surrender our lives (or at least our money) to them or to their organizations.

And, of course, we do hear about a certain few “sins” that happen to be the ones our groups choose to talk about most. They also usually happen to be ones that Jesus did not emphasize or even mention. Also, they don’t appear publicly very often in our contemporary American Christian circles. How convenient is that?

Today we are just asked to acknowledge something about who we think Jesus is. And we are usually asked to make a simple statement that we are sinners and need forgiveness (with no sins explicitly mentioned). These modern belief-requirements often come together in a short prayer something like

“Jesus, I acknowledge you as Lord. I admit that I am a sinner and need your forgiveness. I invite you into my life as Lord and Savior.”

But even Adolf Hitler, in his public speeches to the German people in the 1930’s, referred to Jesus as “my Lord and Savior Jesus Christ.” Because he said things like that, many “German Christians” gave their allegiance to him as their “Christian” leader.

d. Actually Believe in Him

“There is absolutely nothing in what Jesus himself or his early followers taught that suggests you can decide just to enjoy forgiveness at Jesus’s expense and have nothing more to do with him.” – Dallas Willard (The Great Omission, p13)

You see, to believe in the Lord Jesus, as the Bible presents the idea over and over – and as history shows our English word “believe” to actually mean – is to love, to deeply admire, to cling to as a source of wisdom and truth and guidance and care. To believe in Jesus has a very strong connection to what Jesus called the greatest commandment – to love God with all your being. It is a very high standard.

And it merits no special credit; it’s the most obvious, elementary thing that needs doing in human life. It gives no bragging rights whatsoever.
But it’s not imaginary; it is the most basic, gut-level reality and necessity. Nothing matters more.

f. Can You Believe?

If you were to write or speak a statement to Jesus making explicit your truly believing in him – in light of the things you just read – what might it say? What would you want it to say? What do you need to think through? Dare you write it out? He is gracious – if you need to edit it in days to come as your insight increases, he understands that. I say, give it a try.

This article is chapter 8 of my 40-page book, The Moral Priorities of Jesus. It is available at LULU.com.
Or here’s a pdf version.

The Table of Contents is as follows:

a. The Gospels as History vii
b. Paying Attention to Jesus vii
c. The Big Purpose of This Little Book vii

Introduction: Why Was He Rejected? 1

3 ◦ Jesus And Religion Had a Difficult Relationship 9

a. Complaints About Religious Leaders 9
b. Some Very Serious Charges 10
c. Liberals and Conservatives 11
d. His Own Solid Reputation 12

5 ◦ To Jesus, Economics and Exploitation Were Moral Issues 15

6 ◦ For Jesus, The Invisible is Always More Important 17