Some argue that the church should avoid questions that have been politicized,
not try to deal in technical, detailed, or political matters,
but rather stick with general moral principles and guidelines. I don’t buy it. But they insist that Christian leaders and teachers should not take specific positions, but rather

Illuminate the moral and religious dimensions of social questions so that the faithful may better form their consciences.

[Lee Spitzer presents this idea, quoting Avery Cardinal Dulles In the last chapter of Spitzer’s serious study of  the responses of US baptists to the Holocaust, (p446).]

Well, of course leaders and teachers should try to illuminate moral dimensions of social questions.  Agreed.

“But! But! What about …”  Obvious first question (in two forms):

I believe that very often the Devil really is in the details (the technical matters).

The Devil cares little about “conscience-formation” if the formed conscience never moves its holder to concrete speech or action.  It’s the details of speaking (e.g. “truth to power”) and of action (to ameliorate the results of evil acts, and to criticize or try to prevent evil acts) that the Devil either fears or hates.

The Devil cares little about “conscience-formation” if the formed conscience never moves to concrete speech or action.  It’s the details of speaking and of action that the Devil resists.

Isn’t that what we would expect the Devil to oppose – a good person speaking and acting in accord with a good conscience?  Such people might actually interfere with those who have the power, freedom, and urge to do evil!

Ancient Micah says the ones with power to do evil do it BECAUSE they have freedom to and choose to.

They get up in the morning and do the evil they’ve been thinking about “BECAUSE IT IS IN THEIR POWER”.

Woe to those who plan iniquity,
to those who plot evil on their beds!
At morning’s light they carry it out
because it is in their power to do it.
They covet fields and seize them,
and houses, and take them.
They defraud people of their homes,
they rob them of their inheritance.
– Micah  2:1,2

Guess What.  They Will Ignore Your Good Conscience. 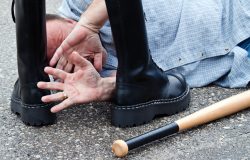 Even if there are well-formed consciences all around, when those good consciences remain inactive, evil people will still do evil – “because it is in their power to do it.”  This is nothing new.  It’s a long-term, consistent historical social reality.  Micah pointed it out clearly.

But also, and crucially for us today, it is still happening – a lot.

They can do evil (to the rest of us, and to people we do or should care about!) BECAUSE they have financial and social-political resources to do so.  They are more powerful than most. They have access to police powers, and to legislatures and courts to protect their abusive lusts and behaviors, and to religious leaders to say it’s all ok.

They can do evil (to the rest of us, and to people we do or should care about) BECAUSE they have financial and social-political resources so to do.

Don’t we already know about these abuses from our own observations of life around us?  Micah did.

Hear this, you leaders of Jacob, you rulers of Israel,
who despise justice and distort all that is right;
who build Zion with bloodshed, and Jerusalem with wickedness.

Her leaders judge for a bribe, her priests teach for a price,
and her prophets tell fortunes for money.

Yet they look for the Lord’s support and say,
“Is not the Lord among us?  No disaster will come upon us.”
Therefore because of you, Zion will be plowed like a field,
Jerusalem will become a heap of rubble,
the temple hill a mound overgrown with thickets.
– Micah 3:9-12

This is harsh.  Micah, you are being mean!

Then Who Should Pay Attention to the Technical Matters – And Should They Speak Up?

So if society’s leaders are not attending to matters of “conscience” derived from “moral and religious dimensions”, then any of the rest of us who DO pay attention are inevitably and fairly quickly going to have to get into “technical” matters.

We’re going to need to see and describe and probably try to resist what is REALLY happening – as against what their highly paid propagandists TELL US is happening.  AND those who resist are going to get into trouble with those bought-off leaders. It happens, a lot – both the corruption and the attempt to suppress truthtellers.  Always has.

The British preacher and theologian P T Forsyth said 100 years ago that we need prophets today who understand the economy like Isaiah (and Micah) did.  Amen. Those “technical matters” are pretty crucial.

And for professed Christ-followers those “technical matters” need to be investigated, and then seriously talked about from a Biblical perspective.  The Bible deals with them a lot. Shouldn’t we?

It is VERY dangerous to teach that we can

Even if there are well-formed consciences all around, guess what? If those good consciences remain inactive, evil people will still do evil - “because it is in their power to do it.” This is nothing new.Click To Tweet

For professed Christ-followers those “technical matters” need to be investigated, and then talked about from a Biblical perspective.
Do you know things – technical but still moral matters –
or do you have the ability and access needed to learn such things fairly quickly –
things that are actually true,
and need to be brought up,
and need to be discussed and perhaps voted on?

Maybe we need you to somehow do that, to help us do that.