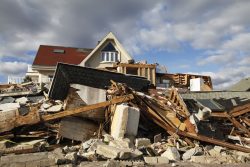 The Bible fairly often makes a direct connection between a] the desolation of a land (and its people – and, obviously, its economic life) and b] moral corruption in the people’s prior social, legal, and economic patterns.

Here’s an example from Zechariah 7. The residents are a small fraction of the numbers present 80 years prior. They live among ruins and in largely unsettled country, though they are making serious efforts to rebuild Jerusalem and its temple and surrounding towns. They see the ruins and the surrounding emptiness every day.

The prophet refers them back to messages brought by prophets to their ancestors – people who lived in these very towns not all that long prior. Here is Zechariah’s summary of those earlier warning messages.

This is what the LORD Almighty says:

What a list. Get a load of #4! For THOSE things they were willing to see their enitire nation, economy, people made a desolation. THOSE are the things God really cares about. Wow. What a surprise.

Those messages of the past were ignored, and the desolation that came, in which Zechariah and his countrymen were living, is blamed on that prior rejection of God’s priorities.

But they refused to pay attention; stubbornly they turned their backs and stopped up

their ears. They made their hearts as hard as flint and would not listen to the law or to the words that the LORD Almighty had sent by his Spirit through the earlier prophets. So the LORD Almighty was very angry.

See how simple and logical – and unpleasant – is the LORD’s comment.

When I called, they did not listen; so when they called, I would not listen,’ says the LORD Almighty. ‘I scattered them with a whirlwind among all the nations, where they were strangers. The land was left so desolate behind them that no one could come or go. This is how they made the pleasant land desolate.

It’s called giving credit where credit is due.