There is no one, and surely no entire people, in whom the image of God has been utterly extinguished. 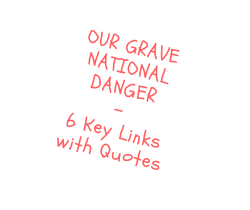 When the President of the United States literally praises mayhem and violence, and major “Christian” spokespersons are stubborn in defense of that, we are well into dangerous territory; there is lethal danger rising from several directions.

1. Voting for Contempt and Hate?

Have We Been Actually Voting for Contempt and Hate?

One of the most dangerous things about this is that, historically and in the present,

such contempt often leads to violence and to the disintegration of social order.

The Bible repeatedly urges us to take a different attitude. For example:

Rescue those being led away to death;
hold back those staggering toward slaughter.
If you say, “But we knew nothing about this,”
does not he who weighs the heart perceive it?
Does not he who guards your life know it?
Will he not repay everyone according to what they have done?
– Proverbs 24:11,12

2. Trump is a Danger to Many Christians!

The Trump Danger to many Christians is Real

Some of our brothers and sisters in Christ already have a target on them, just because of their skin color. Trump’s rhetoric increases the visibility of those targets.Click To Tweet

Freedom From Fear – Comes From Your Faith, Not Your Government

No government can ever guarantee that you or I will have nothing to be afraid of. And as the American Founding Fathers well knew, no government, not even ours, can be trusted with freedom to do just as it wants. The Founders built “checks and balances” into the US Constitution for very good reasons.

It is precisely this problem that prompted Jesus’ disciple Peter to write,

So then, those who suffer according to God’s will should commit themselves to their faithful Creator and continue to do good. (1 Peter 4:19)

The people he was writing to were suffering some serious persecution. Though likely random and technically illegal, it was happening. Still, Peter’s advice was that they keep their trust focused on the God of grace, and that they keep doing the good Jesus had called them to do – regardless.

Jesus and Evil People – Strong Resistance while being Non-Violent

A. Jesus insists on integrity and justice, and the pursuit of those values often precipitates conflict with powers and customs, and often requires deliberate resistance.
B. But Jesus also insists on non-violence.
We can be non-violent and still act and speak in ways that resist and undermine falsehood and unjust power. And that, I believe, is a good part of what Jesus is after

Many Will Die. This Tax “Reform” is a Vicious Assault Against Us and People We Care About.

This is all for the sake of GREED – America’s love affair
with the false God “Mammon” that Jesus warned us so clearly about.

“Beware of these people. They like to walk around in expensive clothes and love to be greeted with respect in the marketplaces and have … the places of honor at banquets. They devour widows’ houses and for a show make lengthy prayers. These men will be punished most severely.” – Jesus, in Luke 20:46-47 (slightly updated)

Are YOU On This List Yet? We are All In Increasing Danger.

One way or another, THESE people, mostly fellow American citizens –
all fellow humans and all loved by God –

THESE people are living in increased fear now compared to a year ago.

This is not a careful list; it’s just off the top of the head.
I’m adding “LLMB” to many of these, for “looks like or might be” – because there are those who suffer just because they LLMB.