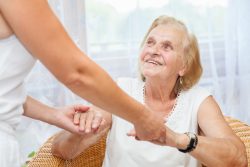 I’ve been over at that nursing blog again (see “Fear and Courage in the Ambulance”). Here are some quotes about a Norwegian philosopher-nurse justifying compassion as a basic value.

Kari Martinsen is an intense Norwegian nurse and philosopher … The Norwegian Nurses’ Association in 2001 adopted a new code of ethics that named compassion as one of the basic values of nursing care. This stems from the theoretical work done by Martinsen.

Caring is central to nursing

Nurses care for people as people who are created

As created beings, humans are eternal and infinitely valuable.

That sets a high standard for nursing – or for any profession – in several ways.

Metaphysics is an interpretation of phenomena that all humans recognize. These phenomena are precultural, prescientific and foundational to existence.

Of course some don’t even want to talk about metaphysics; metaphysical ramblings deservedly have a bad name. But it seems pretty obvious that, since we CAN talk to each other, there really is “something out there” that provides the context in which we talk.

So, as long as we’re appropriately careful, we are both free and responsible to talk about that “something” that is our context. To me, that is where the real distinction between Christian and anti-Christian philosophy often begins. The crucial matter is not usually how we formally define it (our context). But it matters hugely how we actually evaluate it, and relate to – interact with – “it.”

According to Martinsen, good human interactions depend on

Without these phenomena, life disintegrates and care for one another is impossible.

Care “forms not only the value base of nursing, but is a fundamental precondition for our lives. Care is the positive development of the person through the Good.”

“Without professional knowledge, concern for the patient becomes mere sentimentality.”

“Moral practice is when empathy and reflection work together such that caring can be expressed in nursing.”

Now she reminds me of Bernard Lonergan, for whom the highest “step” of epistemological development is to be totally in love with God. It reminds me also of Martin Luther King talking about how liberals are often strong-hearted and weak-minded but we need to be strong in both.

This next paragraph made me think of Martin Buber’s I and Thou, which Connie and I have been reading lately.

Sovereign Life Utterances “are phenomena that accompany the creation itself. They are precultural in all societies. Sovereign life utterances are openness, mercy, trust, hope, and love.

These are phenomena we receive in the same way we receive time, space, air, water, and food. Unless we receive them, life disintegrates.

Vocation “is a demand life makes to me in a completely human way to encounter and care for one’s fellow person. Vocation is given as a law of life concerning neighborly love which is foundationally human.”

It’s a good thing I don’t read Norweigan, or I’d have a couple more new books on my shelf demanding to be read.

Here’s more about her:  Kari Martinsen