[Thanks to Rob C for this.] 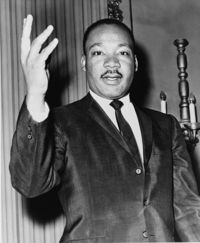 This speech is amazing. Apparently, after the civil rights movement, Martin King started fighting for the poor– all the poor. He realized that ‘civil rights’ wasn’t a racial issue alone. And the mainstream turned on him because they weren’t willing to see the additional evils of this country… they could deal with racism, perhaps because of Lincoln, but he was attacking some things about America of which it was (and is) still proud. That’s what I heard before today. This speech is about Vietnam; I am thrilled to find that how he thinks is so familiar, but also I am disgusted that so many things are the same.

Here are a few remarkable pieces:

“I found myself in full accord when I read… ‘A time comes when silence is betrayal.’ That time has come for us in relation to Vietnam.”

“I knew that America would never invest the necessary funds or energies in rehabilitation of its poor so long as adventures like Vietnam continued to draw men and skills and money like some demonic destructive suction tube. So I was increasingly compelled to see the war as an enemy of the poor and to attack it as such.“

“I knew that I could never again raise my voice against the violence of the oppressed in the ghettos without having first spoken clearly to the greatest purveyor of violence in the world today — my own government. For the sake of those boys, for the sake of this government, for the sake of hundreds of thousands trembling under our violence, I cannot be silent.”

“Ho Chi Minh has watched as America has spoken of peace and built up its forces… Perhaps only his sense of humor and of irony can save him when he hears the most powerful nation of the world speaking of aggression as it drops thousands of bombs on a poor weak nation more than eight thousand miles away from its shores.”

“Here is the true meaning and value of compassion and nonviolence when it helps us to see the enemy’s point of view, to hear his questions, to know his assessment of ourselves. For from his view we may indeed see the basic weaknesses of our own condition, and if we are mature, we may learn and grow and profit from the wisdom of the brothers who are called the opposition.”

Reminds me of words used by Robert Bowman quite recently, about how to handle terrorism: their legitimate grievances. Kind of a sad thing… I don’t think I respected MLK Jr. until today.