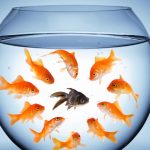 Samaritans in Jesus’ day were both religiously and racially despised. The phrase “Samaritan lives matter” would have been very offensive to the Jewish culture in which Jesus was raised and in which he was a teacher and doer of good. But to Jesus, clearly Samaritan lives did matter.

It is true and appropriate to say so.  We must emphasize the value in God’s eyes of excluded groups.


Jesus is just willy nilly stepping on all the racist, discriminatory toes around.

Back then, it seems Samaritans felt the same about the Jews.  Their Scriptures, their temple, their patterns of worship, their moral / religious standards of behavior – were all wrong, dangerous. They were beneath contempt. They didn’t matter.

But Jesus did not participate in such discriminations against people, not in either direction.

The tensions were not exactly the same as today in the USA – new times and places always produce new particulars.

But I bet things were the same in important ways, like:

He seems to think it is normal to treat people with active respect – even Samaritans – even women. Discriminated-against lives MATTER!

The first three are from the story in John 4 of Jesus’ interaction at a well with a Samaritan woman.

1. Jesus went where he “should not” go – where the racially, religiously corrupt people were.

Had he been appropriately touchy about matters of racist discrimination, Jesus would have gone up to Galilee by another route – which was very common among the Jews.  But he chose not to. He deliberately chose a route that would put him, with his followers, in contact with Samaritan territory and people. It was a deliberate choice.

Do we make that choice in our daily lives – with at least some regularity?

Our society is structured so that many of us can easily avoid racial or religious minorities, or economic underclasses. Do we choose against that structured racism?

2. She was surprised that he, being a Jew, would speak to her.

Do we actively, courteously connect with other humans across the lines that “everyone knows” are not safe to cross? – even if it seems to some that by doing that we are being disrespectful to our own race or religion or economic class?
He asked her for a drink. But, as is pointed out, Jews did not even speak to Samaritans.  Here is the clear “need” for racial and religious discrimination. Jesus – as a Jew and a religious teacher – would honor that racist practice, as one way to honor the Scriptures, the religion, and even the racial identity of his people. But he did not honor that racist practice.  He paid that standard of discrimination and hate no respect.

Do we practice the same level of courtesy and courage?

Do we actively, courteously connect with other humans across the lines that “everyone knows” are not safe to cross?  – even if it seems to some that by doing that we are being disrespectful to our own race or religion or economic class?

3. Jesus’ disciples were surprised he would talk to –  a woman,

not just because she was a Samaritan.  At least, that is the only reason the author gives for their surprise. It shows Jesus violating not only racial and religious racist boundaries, but also breaking a strong pattern of gender discrimination.

4. Notice – he gives this woman, a Samaritan, a considerable honor.

He did not honor that racist practice. He paid that … discrimination and hate no respect. Do we practice the same level of courtesy and courage?
He has a very direct and very deep theological discussion with her – but women weren’t supposed to be up to handling that! And Samaritans certainly didn’t deserve deep, real conversations about such things – that was risky. But he did it! He chose to. He put out the effort to make himself available to her for deep, real conversation.

Further, she is thus held up, for those who would hear or read John’s Gospel, as one deserving honest attention and courtesy.  She was one of the earliest to interact with Jesus one-on-one about matters at the core of his ministry and of his Gospel.

Do we regularly honor people with our full attention and engagement, regardless of their social “qualification”?

Jesus is just willy nilly stepping on all the racist, discriminatory toes around.

5. Another time Jesus made a Samaritan to be the hero of one of his most famous, dramatic stories.

His practice and teaching obliterated the strong, precious ways Jewish males set themselves apart.
“The Good Samaritan” (Luke 10) is not only about being helpful to someone in serious trouble, like the man who got mugged. Jesus made the hated race, the despised religion – the Samaritans – the centerpiece of his story. It is the despised one who does what Jesus says is one of only two essential religious acts – loving one’s neighbor. Either Jesus made the story up, as an illustration, or he used an actual event that people knew about. In either case he chose a story that would feature a despised minority.

He seems to think it is normal to treat people with active respect – even Samaritans – even women. Discriminated-against lives MATTER!
The gut reaction some American Christians would have against those examples is precisely what Jesus was after.  We, like the Jews listening to Jesus, prefer to think WE would be the heroic examples of spiritual good.  But Jesus was not seeing it that way.  We’d better be sure he has no reason to see us today like he apparently saw his co-religionists back then.

And the moral of the story, according to Jesus? “Ok. Now you go and behave as that vile religiously corrupt racial mongrel has demonstrated so well for you.”

“You go and do likewise.”

They saw themselves as above everyone else on earth. Wow. But here is Jesus deliberately, firmly setting all that aside. Boom!

They saw themselves as above everyone else on earth. Wow. But here is Jesus just casually setting all that aside.
But notice – he does not do it in an “in-your-face,” “what do you think of THAT?!” kind of way. He makes it just a normal part of life. He seems to think it is normal to treat people with active respect – even Samaritans – even women. Discriminated-against lives MATTER!

Is not this true – that if we claim to believe in Jesus we must let his teaching become in practice the guide of our lives?  Even when he is deliberately provocative like in his story of “The Good Samaritan.” We must.  “Why do you call me, ‘Lord, Lord’ and do not do what I say?”