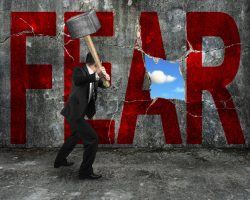 Some American Christians worry that we are being persecuted and that our freedom of religion is being infringed. That’s always true to some extent – and the idea is scary.

How did Jesus deal with it?

Jesus practiced non-violent non-cooperation toward evil persons. The results of his courage were both short-term and long-term, mostly good, some brutally bad.

Peter wrote, for example, about “fiery trials” – being accused unjustly, suffering horribly in spite of being good people. That’s happening to many in our world today, for many different reasons.

The crucial thing here is to learn what approach WE should take when developments in the world around seem to threaten us in particular. And Peter gives specific, unambiguous guidance.

As Christians we must take seriously his advice since we will face “normal” difficulties just like everybody else. And sometimes there will be actual persecution for our faith. (The Bible also strongly emphasizes how to respond when OTHER people are being mistreated – a subject for another article.)

However severe it is,
even if “the end of all things is near” as Peter says,
live in grace ANYway –
practice simple, straightforward Christian living –
THAT’s what he urges on them.

If we think that our current situation demands some other political or legal or military strategy – we’d best be sure we’re fully implementing THIS Biblical and apostolic strategy first – don’t you think?

The temptation under threat is to panic. Or to freeze up. To lash out. To hide. Or to let our thoughts race like crazy. To jump to conclusions – maybe about what’s going to happen, maybe about what we’d better do fast! Or to strike back verbally, physically, or with the arm of government.

But Peter says, first, to settle down and start thinking realistically. “Be clear-minded and self-controlled.” Even that can be frightening – but he clearly says to do it. Good thing to work on.

The most crucial “secret” to effective prayer is honesty. Healthy humility doesn’t hurt either. And a crucial ingredient of both honesty and humility is thoughtfulness, or awareness. So he says, “The end of all things is near. Therefore be clear-minded and self-controlled so you can pray.”

Ahh, so we should pray – thoughtfully, honestly!

Settle down, think, and bring those thoughts, concerns, fears, ideas and hopes all fully and explicitly into the presence of the Lord in prayer. The testimony of history – of those who have actually worked on prayer – is that it is well worth the time and effort. Pray. Good thing to work on.

Well look! It’s the second of Jesus’ two greatest commandments! “Love you neighbor as yourself.” Are we surprised that Peter asks Christians under stress to continue to practice their faith?

Great Commandment #1: Love God – and think honestly so you can come to God in effective prayer.

Great Commandment #2: Love your neighbors. “Above all, love each other deeply, because love covers over a multitude of sins.” “Above all!” Good thing to work on.

This is not about coffee and donuts. It’s about welcoming people – even strangers.

The Greek word used here is sort of the opposite of “philadelphia”, which means “love of brothers.” This one’s built of two words that mean “love of strangers.” That’s a major Biblical theme – loving foreigners, strangers, aliens, people who are not us and not just like us. It’s about extending that love into practical welcome, practical service, practical cooperation. That’s the kind of thing Peter thinks we should be doing when we’re afraid. Awesome Christian morality! And “without grumbling!” A good thing to work on.

E. Serve Others with Your Abilities, Whatever They Are

“The end of all things is near, therefore… each one should use whatever gift he has received to serve others.” Our individual abilities or experiences are gifts of God and he intends us to use them to the benefit of others around us.

Eyes up, off the ground, off our fears about ourselves and our anger, outward to the needs of those around.

This requires a certain thoughtfulness – to be aware of two things: 1) what the needs really are, and 2) what the ways are in which we each might particularly be able to help.

Yet another good thing to work on.

The end of all things is near.

However severe it is,even if “the end of all things is near” as Peter says,live in grace ANYway –practice simple, straightforward Christian living –THAT's what he urges on them.Click To Tweet

So then, those who suffer according to God’s will should commit themselves to their faithful Creator and continue to do good.

Peter makes clear that THIS is the way Christ will in fact be worshiped and God honored.

. . . so that in all things God may be praised through Jesus Christ.

We Christians must do what Christ asks of us, and this is what He is asking. Peter says a few sentences later, “This is the true grace of God. Stand fast in it.”

Leave a Reply to william X