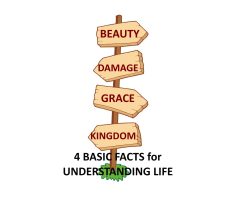 Three of the four Gospels (biographies of Jesus in the Bible) put considerable emphasis on the idea of the “Kingdom of God” or the “Kingdom of Heaven.”  Jesus speaks of it, and makes clear that

this is a very different way of running society.

The fourth Gospel (“According to John”) avoids that kind of “kingdom” or implied governmental emphasis.  In John’s Gospel the focus is relational – the relationship between humans and the Divine.  The idea “believe” gets strong emphasis, and that is a matter of heart, of will, of purpose, of inter-personal commitment.

That idea of course is present in the other three, but it is instructive that in John’s account Jesus hardly mentions the idea of a power-based human society (like they all were living in one way or another) that is being restructured.  The focus here is directly on

in the light of the radically different system of values that Jesus practices, points out, and explains.

It can be referred to in different ways:

Good list, eh?  To believe in – or to realize and buy into – the idea that God is always at work developing

of this radical new social reality really does put one into a different life context.  It affects your thinking, your behavior, and before long your emotions.

The Kingdom of God has come near.  – Jesus

My Father works, and I work.  – Jesus

Blessed are you who are poor, for yours is the kingdom of God. – Jesus