Find and work from your truest, deepest values… Say it out loud and every chance you get.

“Over and against these senseless modern myths …
there is the “myth” of the God of goodness
who has chosen people to prepare
a kingdom of justice, truth, and love on earth.
This myth dies hard.
Why should we refuse to admit that Christ taught it to us?” 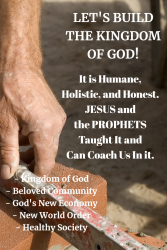 This is the basic concern of this blog, the reason it exists;

A. THERE IS ONE KINGDOM …

There is this “one kingdom.”

In the Bible it’s not always called “kingdom” – John’s Gospel hardly mentions the word, speaking much more of a relationship of deep faith with God in Christ. But the effect is the same.

But whatever it’s called, the idea is a beautiful one. The Bible holds up this ideal over and over in many different ways. It has also been a persistent and strong human longing, around the world. all down through history.

We can be consciously, actively committed to it, involved

in the pursuit of this “kingdom” – deeply devoted to it.  Jesus said, “Seek first God’s Kingdom.” What a wonderful idea!

These things richly deserve our attention. Our world desperately needs us to be giving these things our attention! AND WE CAN! What could we think of that would actually be more hopeful?!Click To Tweet

In this ordinary world we often find that our leaders and teachers are dishonest and/or not as well-informed or wise as we need them to be. It is a perpetually re-cooked recipe for repeated disappointment and betrayal. We should not be surprised when that happens since key people (often our “leaders”) are surrounded by the apparently irresistable seductions of ego, wealth and power.

The Kingdom of God, the Economy of God, the Society of God offers us an absolute integrity at the top.

Jesus is the indication of how true this is. Even his enemies said of Jesus – “Teacher, we know you are a man of integrity.” “You do not show partiality but teach the way of God in truth.” These sentences show both the problem and the response.

It seems to me we should buy into a kingdom like this – one that both claims to be honest and has repeatedly shown itself to be so. That means, of course, that we need to be learning how to be honest ourselves, since that’s the way it IS in this wonderful kingdom. There have been, sad to say, many seduced into fraud and violence by “ego, wealth and power” while pretending to serve that One True Kingdom.

Unfortunately for us, for now, this will have to be lived out in the context of human institutions that have repeatedly shown themselves to be dishonest and dangerous. Still – is not the better choice obvious? We can expect the powers that be in the dishonest kingdoms around us to turn against us – often or rarely, at any time, obviously or covertly, for any reason or no reason. But the Christ of God will not do that – even if at present his freedom of operation is limited, in temporary submission to human freedom, in this nasty, deeply dishonest, but temporary (“temporal”) context.

God is the Creator of the whole physical environment we live in AND of us humans. If this God actually has a way of seeing things, a way to understand and operate in relation to this world – which, being the Creator, he surely does! – well, that Divine perspective would be what “holistic” means! A way of thinking and living that values all of this Divine creation, and that therefore prioritizes

Could not our current “normal” worldly systems of operation use some reformation in the light of these better principles?

The style of life and religion and “economy” that Jesus teaches, that the apostles taught, that the ancient Hebrew prophets taught, is respectful of human needs, human rights, and human potentials. It prioritizes decency, justice, and mutual concern. It condemns and rejects the greedy, the violent, and the dishonest. It is truly humane.

Jesus was a strong fan of the moral perspectives of the ancient Hebrew prophets, and they too give much practical instruction in how to live a Kingdom-style life within these dishonest kingdoms we live in for the time being.Click To Tweet

C. JESUS AND THE PROPHETS DESCRIBED IT AND TAUGHT US HOW TO PURSUE AND BUILD IT.

These things very much deserve our attention.

These things richly deserve our attention. Our world desperately needs us to be giving these things our attention! AND WE CAN! What could we think of that would actually be more hopeful?!

This is the basic concern of this blog, the reason it exists –

There is one Kingdom that is truly Honest, Holistic, and Humane.
Jesus and the Prophets described it, and taught us how to pursue and build it. Let’s!