There is serous realism in Gandhi’s convictions. How do they relate to our (your) American understandings of freedom and of equality?

Equality … a relationship of mutuality and fellowship. 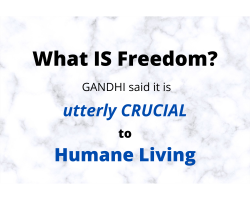 To deny a man freedom is to force him to be untrue to himself and to live by someone else’s truth.

Of course there are people who think they should have that authority – to dictate life choices to others.  But that means they do not believe in freedom as a high value – except for themselves. That is a VERY old human problem; and, we must admit, it is very un-American, even anti-American.

It is closely related to “equality.” And to Gandhi,

A commitment to equality goes on to desire and if possible provide for that other person the room and tools necessary for them to grow and develop as a human being.
“Equality … at bottom a relationship of mutuality and fellowship”
Had you thought of that?

If I think of another person as having true and legitimate freedom, being equal with me in having freedom, that means that I think of that other person as one with whom I might actually fellowship.  I may not like how they choose to use their freedom, but we stand together in a space of mutual respect. That is equality. I think that’s a much higher standard than lies behind the way freedom is usually perceived in the USA today.

[These quotations are from Bhikhu Parekh, A Very Short Introduction to Gandhi  Oxford UP, 2001.  Pages 117-118.  (Parekh uses past tense verbs (“was” “grew” “consisted”) because, I suppose, he is writing of someone else’s ideas, spoken or written decades earlier.)]

And this commitment to equality desires and if appropriate helps provide for that other person the room and tools necessary for them to grow and develop as a human being.

“What I need for my development … “

Whatever that is, it would be truly a basic human right.  Truly a most crucial freedom.

“What I Need For My Development.”

Gandhi assumes that this need is a basic reality, and a priority value.


Equality consisted in all alike being able … It did not mean that I should get what others get, but rather that I should get what I need for my development.
Giving TOP priority to this freedom for individuals to grow does not mean we establish a chaotic social environment of wildly unrestrained freedom.  Defenders of extreme capitalism (the contemporary American variety) seem to promote and very much desire such lack of restraint for themselves, and for the superbly wealthy.

But that is not the freedom that ALL of us need.

Their intensely-desired freedom of greed and power-lust is in fact very destructive of this much more humane freedom that all of us need – and that we as a society need to see being lived out among us.

This true and humane freedom requires instead a working together

I tend to believe our American Constitutional structure would be effective as an outline for a structure for such deep freedom and equality.  1) A problem is that so many of us do not value that humane development as a standard for freedom and equality. 2) Another problem is that many of us see our Constitutional tradition as just a hindrance to our (their) self-aggrandizement via wealth and power.

Still, I think it’s possible to develop our present situation and resources in this more healthy direction.
We need

This kind of freedom is an actual, life-giving freedom.
This kind of freedom is not the military-oriented, allegedly military-derived and military-defended “freedom”.  We constantly hear from people around us about our military powers “defending our freedoms”, and we hear it from certain politicians in their ongoing subversive efforts to remove from us this actual, basic, and necessary freedom.

As progressive and reflective beings, individuals ‘grew from truth to truth’ and strove to enrich, deepen, and reconstitute their being.Equality consisted in all alike being able to do so.Click To Tweet

If, as the title says, “Personal Freedom and Equality are Utterly Crucial to Humane Life” then this is not just some wild-eyed liberal fantasy.  It shows up in those famous old words “life, liberty, and the pursuit of happiness.”  It’s what America is supposed to be about.

If individual freedom is not permitted, then any person’s public stance cannot be accepted as the individual’s true stance.  It is the stance of a puppet.  That situation is neither human nor humane nor free.

What Jesus Wants – That We Exercise our Freedom to Say “Yes”

Seriously.  Why would we study Jesus, and the Prophets and Apostles, if we did not realize they are asking us to exercise our personal freedom to respond?