Violence … changes only the rulers, but not the rules.

How painful to be so lovingly and faithfully involved in what you know is a dead-end ministry! We need to honor Jeremiah for his faithfulness under such circumstances. And if we feel our situation is similar, we need to imitate his loving and faithful truthfulness. 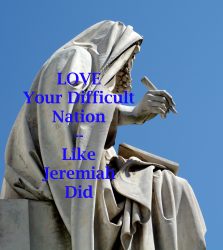 This was written right after the 1st Obama election while the “Christian right” was completely freaking out. It seems relevant today. Let me know what you think.

Jeremiah, often called “the Weeping Prophet,” perhaps did ok in picking his parents, but he picked a horrible time-frame in which to work!   Here are some short descriptions of this prophet.*

1. He was at once gentle and tenacious, affectionate and inflexible.

2. The natural aspirations of youth were to the youthful prophet denied.

That surely includes the very appropriate longing to be successful in one’s ministry, to have the labor of one’s heart and mind bring positive results among the people one loves. He didn’t get to see that happen, but he labored long years in his calling anyway.

3. He insisted on repentance from a people who were incapable of contrition.

The nation as a whole shows some commitment to change (i. e. “repentance”)

They CHOOSE to listen to (a) blatant well-known liars (b) people who are paid multiplied millions to lie to them (c) people whose slanderous, vile, even violent talk makes clear their complete lack of healthy morality, Christian or otherwise.
But what am I hearing post-election from “Evangelicals” around me?

Why, why, why do they think and behave like that?

I suppose it’s largely because that’s the kind of thing they are hearing from their chosen “prophets”.  That’s serious. They CHOOSE to listen to

It’s good that they feel ignored; thinking like that richly deserves to be ignored. But if we are asking for repentance from these “Evangelicals”, we are apparently not going to see much of it.

Is the US Becoming a Repentant Nation?

If, on the other hand, we are hoping for repentance from the nation as a whole, there is clearly some interest in that. Maybe not enough. No doubt most of us who voted for Obama don’t realize how dangerous our situation is and how judgment-worthy our behavior has been, nor for how long.

But there IS a pervasive sense that we’ve been on the wrong track, that the rest of the world is right about that, and that some very important things need changing.  That is much more reason for hope than Jeremiah ever got. That, as far as it goes, is repentance, and as such is a very good thing. May it continue!

4. He unmasked the nation’s sins and broadcast its judgment knowing that it would end in futility.

How painful it must be to be so lovingly and faithfully involved in what you know is a dead-end ministry! We need to honor Jeremiah for his faithfulness under such circumstances. And if we feel our situation is similar, we need to imitate his loving and faithful truthfulness.

5. Those whom he loved hated him.

A common experience for loving truth-tellers. But some actually see some measure of real success, unlike Jeremiah.

6. A loyal patriot, he was branded a traitor.

Another common occurrence down through the millenia, one that has happened a lot in recent American history.

7. This prophet of undying hope had to exhibit the fallacy of his people’s hope.

8. This priestly intercessor was commanded to intercede no more.

That must be really weird and unpleasant.

9. This lover of Judah was by Judah maligned.

Sort of like Jesus.  Sort of like so many recently who love America and have been publicly slandered as “America-haters.”

How many men and women in recent American history have some or all of these characteristics?

As an example I think often of Jim Wallis of Sojourners who for decades was pretty much isolated, worrying and writing and working without much apparent effect. And now he is widely recognized and approved for his work, and is seeing real fruit. So he is, finally, a lot better off than Jeremiah – at least for now.

The Value of the Bible

Maybe Dallas Willard is another one a little like Jeremiah – saying what needs saying and not having the broad effect he deserves to have. About using the Bible, he wrote this 20 years ago:

How do such Bible stories help?
Upon a
realistic,
critical,
adult reading,
by those prepared to be honest with their experience,
the Bible incisively lays bare the depths and obscurities of the human heart.
That is why it continues to play the decisive role it does in human history and culture and why it is fitted to be the perpetual instrument of the Spirit of God for human transformation …

We really can learn a lot from Scripture –

Jeremiah sets us a worthy example. Whether we are justified in having a little more hope than he did perhaps remains to be seen.

There IS a pervasive sense that we're on the wrong track, that the rest of the world is right about that, that very important things need changing. That's more reason for hope than Jeremiah ever got.Click To Tweet

*[The list is from Tyndale’s 3 Vol Illustrated Bible Dictionary, 1980.]

**[The Willard quote is from The Spirit of the Disciplines: Understanding How God Changes Lives, HarperCollins, 1988, p68.]