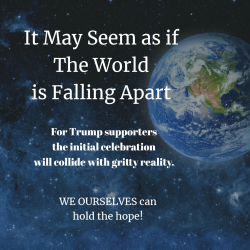 I. “It may seem that the world is falling apart.”

Normal is coming unhinged. For the last eight years it has been possible for most people (at least in the relatively privileged classes) to believe that society is sound, that the system, though creaky, basically works, … Now that we have … rejected a wolf in sheep’s clothing in favor of a wolf in wolf’s clothing, that illusion will be impossible to maintain.

… likely … he will fill his cabinet with neocon war hawks, Wall Street insiders, and corporate reavers…

Well, he has certainly been doing that.

[Trump will be] …trampling the wellbeing of the working class whites who elected him while providing them their own sugar-coating of social conservatism.

[The quotes in this article are from 2 days after the election,  2016, from an article by Charles Eisenstein: The Election: Of Hate, Grief, and a New Story”.  He has a number of valuable points, often quite well expressed, that I want to emphasize.]

Trending
Give Credit Where It’s Due – But Don’t Assume Too Much
He worries that our … whole democratic / governmental framework, will lose credibility with most Americans, and … there will be no strong popular support to protect it or try to get it working again.
Eisenstein predicts that those who voted for Trump from fear and anger over current situations, or their perceptions of the future, will not be well served at all by the new President. Trump’s attitudes toward Wall Street and large corporate interests make clear that this author is right.

Trump is “TRAMPLING the wellbeing of the working class whites who elected him” while he seems to support a few of their “moral” issues – usually by increasing the danger in which some minority or other lives day by day. It’s all very sad, and obviously was very predictable.

For Trump supporters, the initial celebration will collide with gritty reality when Trump proves as unable or unwilling as his predecessors to challenge the entrenched systems that continually degrade their lives.Click To Tweet

For Trump supporters, the initial celebration will collide with gritty reality

when Trump proves as unable or unwilling as his predecessors to challenge the entrenched systems that continually degrade their lives … the public’s frayed loyalty to the existing system could snap. … It may seem that the world is falling apart…

Yes, it may.  And there are predictable consequences.

II. Voters’ Repudiation of the Establishment

To blame bigotry and sexism for voters’ repudiation of the Establishment is to deny the validity of their deep sense of betrayal and alienation. The vast majority of Trump voters were expressing extreme dissatisfaction with the system in the way most readily available to them. Millions of Obama voters voted for Trump (six states who went for Obama twice switched to Trump). Did they suddenly become racists in the last four years?

The dissolution of the old order that is now officially in progress is going to intensify. That presents a tremendous opportunity and danger, because when normal falls apart the ensuing vacuum draws in formerly unthinkable ideas from the margins. Unthinkable ideas range

Anything becomes possible with the collapse of dominant institutions.

Eisenstein expresses great hope. He believes in some great strength, in “inexhaustible tools”, in great energy and vision for “creative engagement.” We OURSELVES can hold the hope on behalf of “the haters”.
“The collapse of dominant institutions” is like a social apocalypse.  It is not a cheery thought.

The point: We don’t know. And while our analyses and educated guesses are of value in helping us prepare – at least psychologically – history has a way of always doing something different.

The other point: the new developments can be quite extreme forms of things now present, or quite extremely NOT much like anything now present. “The times, they are a-changing” is not just a song lyric.

From rounding up Muslims in camps, to dismantling the military-industrial complex. From nationwide stop-and-frisk to replacing punishment with restorative justice. Anything becomes possible with the collapse of dominant institutions.Click To Tweet

So, as psychological preparation, let’s consider for a minute the kinds of things that can show up on the bad side of the possibilities list.

When the animating force behind these new ideas is hate or fear, all manner of fascistic and totalitarian nightmares can ensue,

whether enacted by existing powers or those that arise in revolution against them. 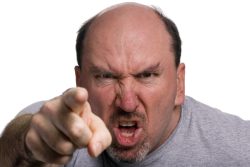 There’s a whole big bunch of ways to do this wrong.

“All manner of … nightmares” – that is, there’s a whole big bunch of ways to do this wrong. And notice he points out that it may not be the first step in the sequence that is a “nightmare.” It might be a reaction against the first step, or the second or third. That is, it is a dangerous situation, and we don’t know how it will go.

So – what should we be doing NOW –

what, that might increase the odds of things turning out less bad, or even somewhat good, as we go willy-nilly into we-know-not-what?

IV. Still, There is Empathy – “a different kind of force”.

That Can Be a Good Tool to Help Adjust our Moral / Psychological Environment.

That is why, as we enter a period of intensifying disorder, it is important to introduce

a different kind of force.

Can we introduce an “animating force” that is different, that is, from the “hate or fear” he just mentioned? Yes. He wants to call it “love” but he thinks that’s too saccharine or new-agey. So he settles on “empathy” which is, after all, an expression of love.

Politically, empathy is akin to solidarity, born of the understanding that we are all in this together.

“All in this together.“

That is just the simple truth. Perhaps we need to meditate on that idea for a minute or two!

Because the situation really is tenuous.

V. “EVERYthing Comes Into Doubt.”

We as a society are entering a space between stories, in which everything that had seemed so real, true, right, and permanent comes into doubt.

That’s scary. What do you hang on to when it seems nothing can be trusted? And that is happening.

He worries that our “system”, our whole democratic / governmental framework, will lose credibility with most Americans, and thus there will be no strong popular support to protect it or try to get it working again. Then things are really up in the air – and you are at the place where anything can happen. I think we are (at least) very close to that.

Our leaders seem not to have a clue!

“Not even the elites are immune to this doubt.”

Wow! Is that the Democratic Party establishment or what?! I mean at the higher levels. Some of the state-level Democratic effort seems to be getting much more credible. But his list is to me a very insightful description of all of our “elites”-  of all parties, in politics, government, finance, the media, the churches, etc

Our leaders seem not to have a clue, not even the elites. They grasp at straws of past glories and obsolete strategies ... their disbelief in their own propaganda, their cynicism.Click To Tweet

We are entering a space between stories … a period of true unknowing.

We NEED more love, real empathy all around.

“What would it take … to embody love, compassion, and interbeing … empathy, the result of the compassionate inquiry: What is it like to be you?

You know, sometimes that’s a really hard question to ask. Sometimes it’s just hard to care. But Eisenstein, in this article, is saying we need to care.

We have to care about each other, or we cannot well care for our society, our nation. He gets passionate, and direct.

Try asking yourself, “What is it like to be a Trump supporter?” Ask it … to find the real person… ask … what confluence of circumstances, social, economic, and biographical, may have brought them there.  You may still not know how to engage them, but at least you will not be on the warpath automatically …

Please stop thinking you are better than these people! We are all victims of the same world-dominating machine, suffering different mutations of the same wound of separation.

The acute trauma endured by

does not exempt the perpetrators. They feel it in mirror image, adding damage to their souls atop the damage that compels them to violence.

Read that last, 3-item list again!  “We are all in this together.”

You may not know how to engage them, but at least you will not be on the warpath automatically ... Please stop thinking you are better than these people! We are all victims of the same world-dominating machine.Click To Tweet

“Something hurts in there. Can you feel it? We are all in this together.”

This does not mean to withdraw from political conversation, but … to speak hard truths with love. We need to confront an unjust, ecocidal system. Each time we do we will receive an invitation to give in to the dark side and hate “the deplorables.”

But do not do that.

Engage them empowered by the inner mantra … “Brother, your soul is too beautiful to be doing this work.” 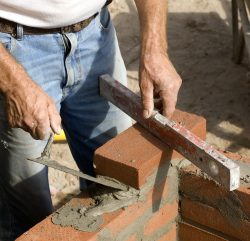 n excellent, enabling vision. Can we see that in people? – so we can say, or at least believe, “Your soul is too beautiful to be doing that!”

We OURSELVES can hold the hope on behalf of “the haters”. Wow. What an assignment. What a calling.

If we can stare hate in the face and never waver from that knowledge,
we will access inexhaustible tools of creative engagement,
and hold a compelling invitation to the haters to fulfill their beauty.