These can be of value to any kind of Christian ministry, not just the professional pastorate.  Here are brief comments on each. 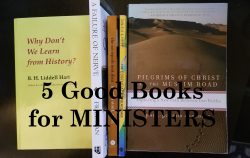 I meet monthly with a pastors’ book discussion group.

We are finishing up, this week:

Edwin Friedman’s Failure of Nerve ($25.  c2017.  288p.).   I find him very helpful in coaching to good self-management practices and good leadership practices.  What next?

Here are 4 books I suggested we might choose from to discuss next.

These can be of value to any kind of Christian ministry, not just the professional pastorate.  Here are brief comments on each, in alphabetical order by title:

Pilgrims of Christ on the Muslim Road:

By Paul-Gordon Chandler (Anglican clergy with much experience in Muslim cultures),

about Mazhar Mallouhi, a contemporary Syrian-born Christian author and evangelist, who lives as a Muslim in Muslim cultures.  Pilgrims on Amazon    $20.  c. 2007.  240 pages.  Probably take us 3 or 4 months to get through.

Very interesting stories – of his conversion and his family’s reaction, his interactions with various “types” of Christians in the middle east and north Africa, various arrests.  Very thoughtful strategy of writing Christian novels for Muslim readers (quite successfully), and of being a witness for Christ in Muslim settings.  Lots of good examples of, and good thinking about, working cross-culturally – which we all are doing!  Very Christian, very spiritual, very loving, courageous.  He met his wife while at Fuller Seminary for a short time.  Yay FTS!

By David Daniels, M.D. and Virginia Price, Ph.D.  $8.  c 2009.  110p.  Maybe best done in three months – even 2, especially if we have some acquaintance with the enneagram.  Essential Enneagram on Amazon

I have used this as a text in a church class.  Of more than a dozen enneagram books I’ve spent time with, this one is the most succinct while still being serious and thorough.  It includes their “subjective” self-test (“the narrative tradition”) which I have used with a number of people.  It seems pretty accurate.  The nine types are each described in a 4-page chart, so it’s a handy reference. I got acquainted with the enneagram when ABCNE sent me to KC for psych interviews prior to ABC ordination about 10 years ago.

The Sociopath Next Door

Lots of examples or stories.  Also considerable real depth of insight from much experience. Do you believe in sin?!  I fear we’ve all met people who could be examples in this book.  Mary Pipher, a well-known author from Lincoln, NE, says, “Her finding, that conscience comes from loving people, is just what we need to know in these dark and angry times.”

Why Don’t We Learn from History?

Serious, erudite, punchy.  Fun to read if you’re into history at all (objective, but with a strong British slant).  2 months would probably get us through this satisfactorily.

Two quotes:
“Ambitious officers … would decide that they would bottle up their thoughts and ideas, as a safety precaution, until they reached the top and could put these ideas into practice.  Unfortunately the usual result, after years of such self-repression for the sake of their ambition, was that when the bottle was eventually uncorked the contents had evaporated.”

And from the last 2 paragraphs: “… ridding oneself of the tissue of untruth … realize that the world is a jungle … Since he will be following [his light] through a jungle, however, he should bear in mind the supremely practical guidance provided nearly two thousand years ago: “Behold, I send you forth as sheep in the midst of wolves: be ye therefore wise as serpents, and harmless as doves.”

Pilgrims of Christ … for extensive practical usefulness.  But probably each of these could make a significant contribution to our respective ministries

These can be of value to any Christian worker. I give brief comments on each. Pilgrims of Christ on the Muslim Road. Essential Enneagram. Sociopath Next Door. Why Don't We Learn From History? Failure of Nerve.Click To Tweet
Share
Share
Tweet
Pin