The human spirit is more powerful than any drug – and that is what needs to be nourished.

I have to wonder if maybe this worldview they’re selling is not as Christian as it seems.

I promised to share some responses I got in church when I read two lists of questions from the pulpit a couple of weeks ago. (The two lists are at the bottom of this post.)

The first list is supposed to define a “Christian worldview”.  I had asked the congregation to watch for differences between the two lists. Their initial responses focused on the following issues. [The “first” list is one being promoted by Dobson and others as representing a “Christian worldview.”  The second list is from Jesus and other New Testament sources.] 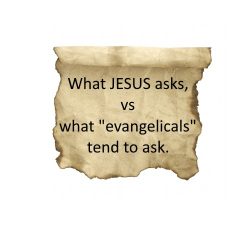 That was impressive. I could have stopped there, the point having been made. But since it is an important point, I kept going in hopes of it becoming even more clear and acceptable in our thinking.

Trending
Give Credit Where It’s Due – But Don’t Assume Too Much
There is no love in the first list.  The first list requires only yes or no answers. The second list requires a lot more.
You may remember that the first list – 8 questions that were largely philosophical (metaphysical or epistemological) – had assumed that such questions could identify those church-attenders who have a truly “Biblical worldview.” The second list – 10 questions all taken from the New Testament – did not seem to be worried much about people’s metaphysics or epistemology.

Here are quotes from the handout that went along with this “sermon.”

A Big Problem With the List Produced by Evangelical Leaders:

Who passes or fails this “Christian worldview” test?

See Ron Sider’s book The Scandal of the Evangelical Conscience. Maybe the problem is moral, not intellectual.

1. It does not focus on what Jesus was and is about.

2. It promotes bad attitudes toward others and toward ourselves.

HERE ARE THE TWO LISTS REFERRED TO ABOVE:

Eight questions to discover how many church attenders actually have a truly Biblical worldview. The pollster concluded that only 9% of professing American Christians do.

2. Is absolute truth defined by the Bible?

4. Is God the all-powerful and all-knowing Creator of the universe, and does He still rule it today?

5. Is salvation a gift from God that cannot be earned?

7. Does a Christian have a responsibility to share his or her faith in Christ with other people?

8. Is the Bible accurate in all of its teachings?

– more questions, also difficult, but from the New Testament.

3. If anyone has material possessions and sees his brother in need but has no pity on him, how can the love of God be in him? (I Jn 3:17)

4. What good will it be for a man if he gains the whole world, yet forfeits his soul? Or what can a man give in exchange for his soul? (Mt 16:2)

5. How can you believe if you accept praise from one another, yet make no effort to obtain the praise that comes from the only God? (Jn 5:44)

7. Why do you look at the speck of sawdust in your brother’s eye and pay no attention to the plank in your own eye? (Lk 6:41)

9. Has not God chosen those who are poor in the eyes of the world to be rich in faith and to inherit the kingdom he promised those who love him? Is it not the rich who are exploiting you? (James 2:5)

10. Did you receive the Spirit by observing the law, or by believing what you heard? (Gal 3:2)